How To Draw Prospects Through Podcasting 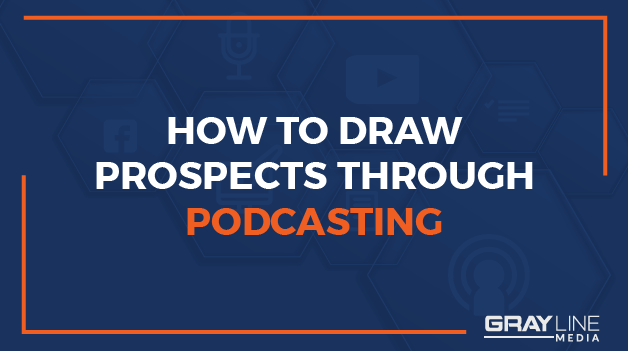 These days it’s almost not a question of if you should try drawing prospects through podcasting. More often, you should be asking “How soon?” And maybe “Audio, video, or both?”

Granted, not everyone’s cut out for podcasting. Nevertheless, a successful one can give your practice an incredible marketing boost. At least 50% of all households in the US, alone listen to podcasts.

As with most things, the more you put into a podcast, the more you’ll get out of it. Conversely, if you use freeware—and then decide you don’t like it, you haven’t lost anything (except the research time).

If there’s a Band-aid to remove, some people like to delay the inevitable. However, we’re mostly yank-the-Band-aid-off types at Gray Line Media (GLM).

In other words, we’d rather give you the bad news first and get it over with: Podcasting isn’t a perfect match for every skill set. Hopefully, this doesn’t scare you off, but we’d rather be upfront.

Before we look at the fun stuff, we’re going to look at the possible (even if unlikely) pitfalls. There’s no severe-injury-or-death-may-occur-s. Nevertheless, what follows are reasons why podcasting might not be for you.

Instant success happens, but it’s extremely rare. Big industry names like Michael Kitces and Taylor Schulte worked to get where they are. There are no shortcuts to winning prospects through podcasting.

If you’re likely to dip a toe in the water—and then immediately sulk because you haven’t landed a marlin, don’t waste the time. Success shouldn’t take forever to reach if you’re meant to find it. Nevertheless, you have to be willing to stick it out.

There’s a lot more chess than Call of Duty to podcasting: Analyze the board and then plan ahead as far as you can. Avoid rushing to action.

Okay, there is one exception to this rule: If there’s a timely, important topic to cover, hurry for that. Otherwise, play the long, game. Focus on value, authority, and stability.

Success is worth it. In 2021, 55% of the US population had listened to at least one podcast. That’s 155 million people. When they find a favorite, 93% listen to most—if not all—of each episode.

2. You Have Commitment Issues

The ROI on a successful podcast can be phenomenal. At the same time, it’s not something to do when-you-feel-like-it: You have to be willing to grind weekly, rain or shine. Otherwise, your chances of success are low.

If you have to make a choice, hold off a bit. Don’t start with a skimpy content calendar. Last-minute topics do happen, but they’re rare.

You won’t need 12 months of content 100% scripted. At the same time, trying to do stretch 4-6 month’s content over a whole year of episodes wears thin fast.

Plan a minimum of one podcast per week. Monday, Wednesday, and Friday releases can be ideal. If you’re just beginning, though, a weekly release can at least give you a taste of the process. Actually drawing prospects through podcasting takes time.

In fact, you’re much better off starting a weekly if that’s the schedule you’re certain you can stick to. Having the best material and sound means squat if you let subscribers down.

We get it: As a financial planner, you’re acutely aware of the benefits of saving money. We like it, too.

However, there’s a difference between avoiding high interest rates and wearing shopping bags for jogging shorts. Similarly, with podcasting, going cheap can make you look foolish.

At the same time, this is more of a long-term consideration, so don’t sweat it while you’re new. Initially, you can cover all your bases for free.

If you have a cell phone and computer in working order, you’re in the ballpark. Most modern cells can record audio decently, if not (in some cases) well.

There’s no shame in recording every episode in your car, but professional equipment really does make a difference. We’re not knocking no-budget approaches (because we’ve been there). Nevertheless, audio recorded on a high-end phone is still no match for a decent studio microphone’s output.

Plan A Podcast With Real Pull

Success in podcasting isn’t a sure thing. Conversely, your chances of success are probably higher than a gold prospector in the 1800’s.

Prepare Topics For Prospects Through Podcasting 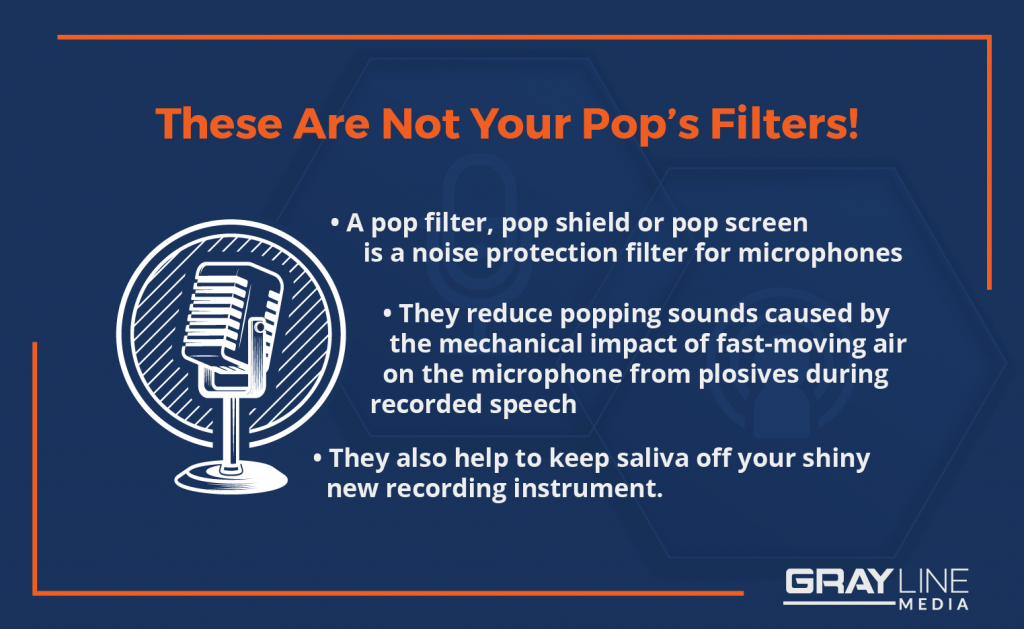 Have you researched your niche lately? Or has it been a year or more since you looked at the demographic?

We know: It’s tempting to say, “I see clients from my niche in the office 5 days a week.”

Be honest, though: That’s not the same thing. In all likelihood, they’re making small talk and discussing their finances—not sharing what makes them tick.

Pop quiz: How many of their pain points can you write down? Is your knowledge of them current or based on data you read over a year ago?

Even if your expected audience is mostly the same demographic you see during the week, get up to date. If you’re out to reach a new one, it’s even more important. If you want to add prospects through podcasting, do the homework.

Take the time to research the latest information you can. At worst, you might wind up retooling an episode idea or two. At best, you could uncover inspiration for several new ones.

We happily celebrate the success of financial planning superstars here at GLM. However, we also have a soft spot in our CRMs for the little guy and gal.

As a result, we’ll discuss preparing for your podcast with the assumption that you don’t have bottomless pockets. Again, you can record a couple of test podcasts on a phone in your car, but that’s not desirable in the long run.

For starters, once you’ve recorded a handful of trial episodes, consider getting a decent microphone. Amazon and other retailers sell the USB variety for anywhere from $20 to far north of $200.

You might want to budget about $60, but watch for sales. For example, you should be able to land a Blue Snowball for around $50.

Apply the extra $10 toward a pop filter.

Okay, seriously: A pop filter is one of those small circular screens between your mouth and the mic. Its most obvious feature is keeping aerosol saliva and food crumbs out of those tiny holes.

Pops vs. Prospects Through Podcasting

Pop filters have a more important function, though. It’s called a “pop” filter because it blocks harsher everyday sounds, too. The sensitivity of a good microphone enables it to catch things our cognitive hearing typically tunes out.

Technically called sibilants and plosives, these sounds help us to be understood on a noisy street. Nonetheless, if recorded by an unfiltered mic, they distort—and can ruin—what might’ve been outstanding audio.

Have you ever wondered why you always see them when someone’s recording vocal music tracks? Now you know. So, grab a pop filter when you invest in a mic.

There are loads of editing software out there. However, Audacity probably requires the least investment for a trial financial advisor podcast: It’s free.

At the same time, commercially-available counterparts often involve less of a learning curve. However for the most part, the more they offer, the pricier they get.

As long as it’s constructive, don’t fear feedback: Horde it. The constructive variety can be priceless, if you sign on for the long haul. Short of spamming write-me-s every 30 seconds when you record, encourage it.

It can be tempting to wax thin-skinned too, but don’t. It’s always better to hear the truth articulated in a friendly (or at least civil) way than to watch your numbers spiral. The more communication channels you can check, the better your chances. This is the secret to landing prospects through podcasting.

Once you get a community growing, you can read their input at your website’s forum, as well. Treat listeners respectfully and some will post at length in response to your requests.

Here are some action items for launching a podcast. 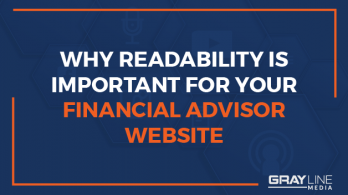 Why Readability Is Important For Your Financial Advisor Website

Is your practice’s site up to Google’s SEO standards? If your answer is “Yes,” how readable is it in online terms? Believe it or not, this is important, even for a financial advisor website.   Try reading one of your pages out loud: Does it flow easily—or sound too much like a verbatim transcript of […] 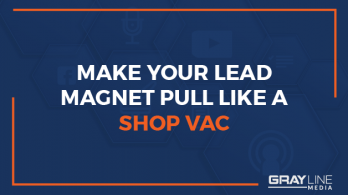 Make Your Lead Magnet Pull Like A Shop Vac

You can’t have a thriving practice without prospecting. Therefore, you need a growing database of prospects. To get that, you need financial advisor lead magnet.   Ideally, you want one that pulls like gravity. Does yours?   Chances are you’re either creating greater compulsion or stagnating. If the worm on your hook dries out, you […] 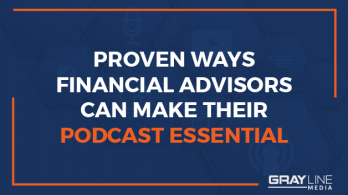 If you’ve started your financial advice podcast, congratulations. The world is listening.   They may not be listening to you (yet), but they’re listening.   Let’s up your content game.   In June of 2021, there were over 2,000,000 podcasts (and more than 48 million episodes) around the world. A majority of those probably weren’t […]

Sign up to get your custom lead magnet designed for Free